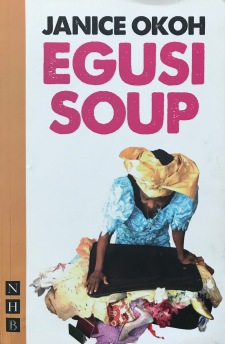 Synopsis: This is the 1st anniversary of John Anyia’s death. The family are setting off to Nigeria for his memorial service. However before they go there is still a lot of unfinished family business that is often brushed up under the carpet that needs settling.

This play was a gift from my friend Rachel, I cannot thank her enough for adding to my collection of plays.

I’m a sucker for family dramas, ‘An Inspector Calls’ was one of my favourites in school. I come from a big family myself and there is always something happening, so many unbelievable stories.

For readers of Nigerian descent, there may be a few or more familiar aspects in this play, culturally and character wise. The Aniya’s are Igbo Nigerians, Mr Emmanuel and Dele are Yoruba. I’m sure the are a million and one defining differences between Yoruba and Igbo Nigerians, since I don’t really have first hand experience. I’ll use regional differences Igbo are situated in southeast Nigeria and Yoruba’s in southwest. However according to Mrs Aniya

ANNE: An Igbo would never have stolen from me. A widow carrying her husband home as cargo p. 12

to which Dele replies,

DELE: No, an Igbo would have stolen the package from you and then try to sell it back p.12

just how accurate or biased these comments are, you decide.

The Aniya girls have grown up in London, Anne has become less connected with her heritage whereas Grace has always been quite in tune with them. Each sister has followed a different path in life and neither are entirely happy. Anne has followed the path that is expected of her, being educated with a degree in law and working in firm in America, rich enough to buy spontaneous trips around the world for herself and the entire family, drive expensive cars and do expensive things. Grace on the other hand could have been an engineer (according to her mother) but instead works in telesales, however she is married which is one thing ticked off the list apart from the fact that she has no children and is still living with her mother.

In African households, the woman has many quotas to fill, to name a few:

At the end of the day it is your parents honour you are upholding. It is particularly worrying if you are going back “home home”, after living in a country that was supposedly meant to give you endless opportunities, to find that nothing was achieved. Both women show two different life choices, but there almost seems to be no meeting point between each path. With a career you cannot start a family and starting a family leaves no space for a career. The pressure is on for Anne to complete her life expectations, there is so much urgency from Mr Emmanuel and Mrs Anyia, in their arrangements for her to find a husband in Nigeria.

MRS ANIYA: … What family? You said she would bring a husband.

MR EMMANUEL: And she will. Is just a matter of when. But now that I have met this girl I know exactly how to pray for her. And this girl needs praying for. Now, where is this olive oil? p. 22

MR EMMANUEL: You know, Anne, the entire village will be attending the church. They’ll be plenty of men for you to choose from. p. 35

This is a very humorous play, Mr Emmanuel being the most unintentionally humorous character of them all. Mr Emmanuel is a pastor, but he can be best described as a leech. Since the death of John Anyia, Mr Emmanuel has been in the Aniya household every day. Through out the play he receives countless phone calls from desperate people who are either having troubles with their foes, trying to achieve a goal or having trouble with fertility. He then gives each of these people advice on what they should do, some even come at a high price which is of course for his personal gain. His suggestions are often quite uninformed, for instance Dele and Grace have been trying but not succeeding to have a baby. According to Dele, a Mrs Adetoyin has fallen pregnant after having tried for 5 years, all thanks to Mr Emmanuel. Later in the play Dele brings out a small bottle with white liquid, the exact thing that was apparently used to help Mrs Adetoyin. This scene is hilarious, I will like to see it live one day. As Dele and Grace start getting intimate, Dele excitedly rushes to get this bottle, which cost him a good £120 – but it’s fine because you only need to use it once.  Dele orders Grace to close her eyes while he rubs this liquid on himself, turning completely white which of course comes as a shock to Grace when she opens her eyes. Dele then gets some corn kernels from a bag and throws them on the floor and around the bed, meanwhile this liquid starts to have a turn and gives him an allergic reaction. He then suggests that the corn kernels must also be inserted in a specific place – I won’t say more, you must buy the play to find out. However, there was a plain and simple reason why Grace wasn’t falling pregnant.

Although this story should be about the memory of John Aniya, it is instead centred around the guilt some characters felt in how they did not meet Mr Aniya’s expectations. Anne became a distant and estranged daughter, she wasn’t there for her father’s last moments and didn’t make it to his funeral. Grace was unable to make him proud in the way that Anne did, she always felt like she came second.

GRACE: Dad used to bring these sweets from work. He’d ask us in the morning what we wanted. She would say Nutty. I wanted Twix. It was always a Nutty that he’d bring home for us to share even though a Twix is already divided into two. p. 62

In marrying Dele, an educated and traditional man, Grace felt she gave her father something to be proud of. Mrs Aniya felt guilty for her husband’s death, John had told her several times that someone would kill him, she never took this too seriously, because she didn’t think it possible in her household. However, on the day she left her soup unattended for 5 minutes, her husband had fallen ill immediately after eating the soup and within weeks he was dead.

Aside from being an opportunist that is later kicked out of the Aniya household, for lying about being Mr Aniya’s colleague, Mr Emmanuel says one thing that I find quite important.

MR EMMANUEL: Why Nigerians born and raised here cannot speak their native language? The Indians, the Chinese, they all speak two, three – comment applez-vous? Yes –now! French. I lived there for three years before travelling to Ireland. p. 37

The way in which the English language is so dominant, that it has the power to make people believe their own language isn’t of importance is quite tragic. I recently went to a workshop where someone said their parents ensured they would only know English rather than maintaining their mother tongue. Crazier still to think that in many African countries, Angola for instance (where I’m from) people often belittle or laugh at you for not knowing how to speak Portuguese accurately, or being considered dumb for speaking Kimbundu. Being considered dumb for speaking your mother tongue! The power to be able retain two languages in your brain is one without measure. English speaking people have this privilege of strolling up anywhere and expecting people to speak English as opposed to attempting to learn to speak the language of place they are visiting.

This is a great play to read it is fast paced, funny and quite an easy read as well so it’s one that can be read a few times over without getting bored.